Skip to main navigation Skip to main content Skip to footer Skip to search
Free shipping on all items within the contiguous US. Use Code: SHIPFREE Details
Free bonus product with any beauty purchase over $50 while supplies last. Use Code: Sunkissed Details
Free Hand Sanitizer 2-Pack with first month's D+W bundle subscription. Use Code: BYEGERMS Details
FREE GROUND SHIPPING IN THE CONTIGUOUS US WITH A BEAUTY PURCHASE. NO CODE NEEDED, RESTRICTIONS APPLY. Details

What is Non-GMO Infant Formula?

At The Honest Company, we take a BEST-FOR-BABY approach in everything we do, and that includes supporting all types of feeding. We believe that how parents feed their babies is a personal decision based on the needs of their families. We also believe pediatricians, dietitians and lactation consultants are key resources for parents in making this important decision, if and when infant formula becomes necessary. But with so many different types of infant formulas available today, it isn’t always clear what the differences are and how to make the right choice for you and yours. That’s why we’re doing our part to provide insight into some of the different formula types, with a specific focus on the distinction between organic and a new type of infant formula on the market labeled “Non-GMO”.

By way of some (honest) background information, all companies that manufacture and distribute infant formula in the United States must adhere to the strict guidelines of the Food & Drug Administration’s (FDA’s) Infant Formula Act in order to ensure that the product meets the requirements needed for proper infant growth and development. The Infant Formula Act covers quality control requirements and procedures, nutrient specifications (located in section 412(i) of the FFDCA and 21 CFR 107.100 – these nutrient specifications include minimum amounts for 30 nutrients and maximum amounts for 9 of those nutrients) and rigorous testing processes.

What Does it Mean to Be a Non-GMO Infant Formula?

What Does it Mean to Be an Organic Infant Formula?

Infant formulas labeled as “organic” do not include genetically engineered ingredients and also comply with the following USDA Organic regulations.

Before a product can be labeled “organic,” a Government-approved, third party certifier inspects the farm where the food is grown to ensure the farmer is in compliance with USDA organic standards.

So to be clear, like Non-GMO formula, organic infant formula has no genetically engineered ingredients, by law. Organic is, and always has been, Non-GMO...and more!

With all of this information in mind, and to better help you make the right decision for you and your family, we wanted to provide you a clear visual representation of the differences between conventional, Non-GMO and organic infant formulas. 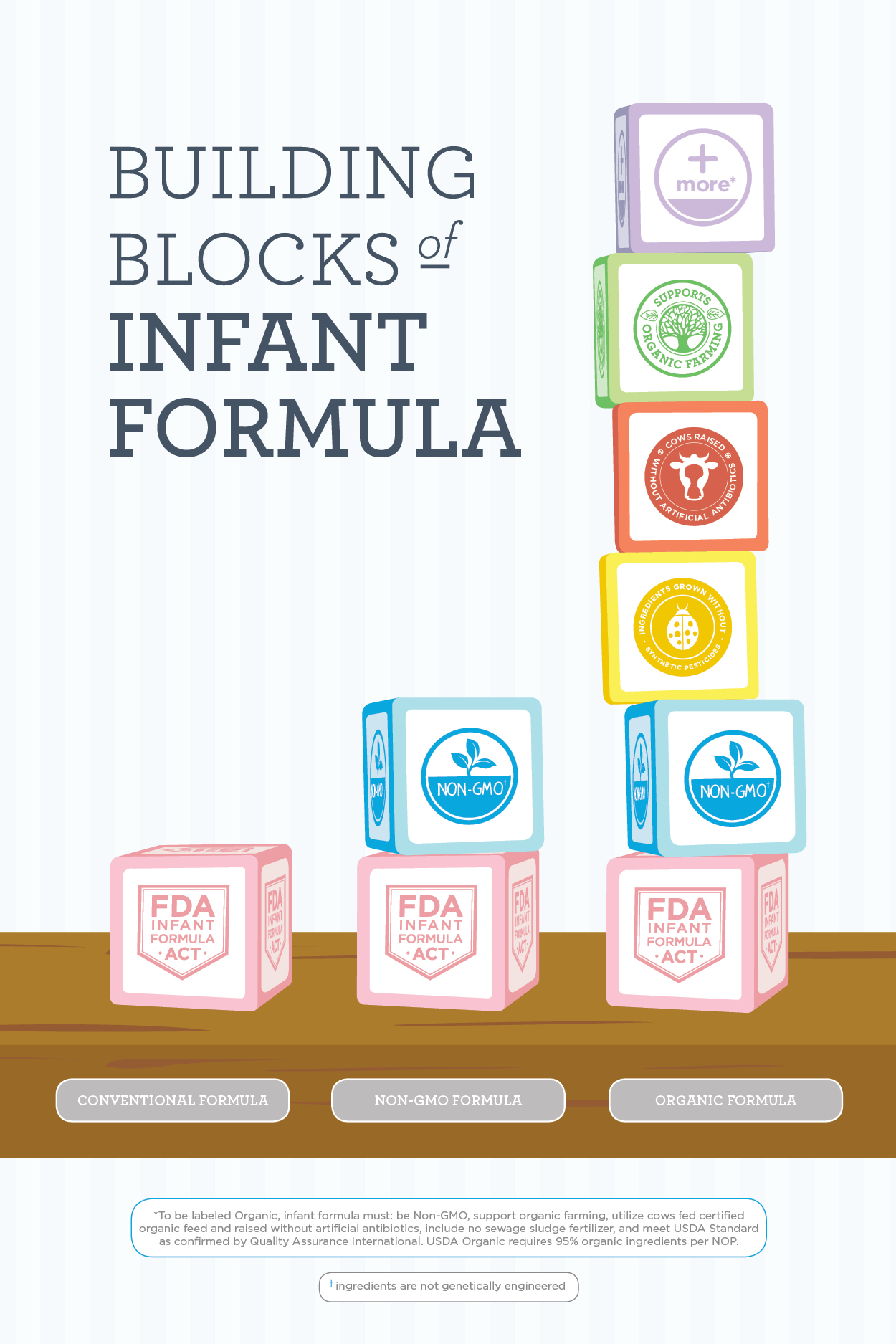 Why Did We Choose to Create an Organic Formula?

As we outlined above, organic food has a wide variety of benefits. Not only are organic foods grown without conventional pesticides and sewage sludge, but they also promote responsible farming methods that protect the environment for future generations. In addition, organic foods must be produced without genetically engineered ingredients.

“Non-GMO” has been a hot topic for quite some time. In 2015, 300 researchers from around the world released a statement emphasizing that there’s no consensus on safety and that more research needs to be done to establish whether foods with genetically engineered ingredients are safe or not (6). Still, in May of 2016, the National Academy of Sciences released a report stating genetically engineered crops pose no additional risks to health when compared to conventional foods (7). The study also found that the use of genetic engineering has increased pest resistance, which according to the study, is a "major agricultural problem."

Our Organic Infant Formula is (and always has been) “Non-GMO” (made without genetically engineered ingredients). Although the jury is still out on the ultimate pros and cons of genetic modification, in line with our steadfast commitment to transparency and consumer clarity, we have updated our Organic Infant Formula label to include this important distinction.

When we decided to create an infant formula, we crafted a formula carefully modeled after breast milk, with complete infant nutrition supplied by high quality ingredients.

We are committed to:

Join us – together we can make it better!

0 to 3 months
3 to 6 Months
6 to 9 months
9 to 12 Months
12 Months + Beyond
DISCLAIMER: Content on this site is not a substitute for professional medical or healthcare advice, diagnosis, treatment, dietary, or safety advice, and may not be used for such purposes. Always seek the advice of your physician or other qualified expert with any questions you may have regarding a medical question, condition, or safety concern. Reliance on information presented on this site is at your own risk. This site contains the opinions and views of others and does not represent the opinions and views of The Honest Company. Given the interactive nature of this site, we cannot endorse, guarantee, or be responsible for the accuracy or efficacy of any content generated by our users or bloggers.