Halloween is one of my favorite times of year, and it can actually be a great opportunity to focus on conservation and sustainability with your family.

Many things that you can do around Halloween to make it less wasteful are about getting back to basics. Here are some of my favorite tips — easy, free, and fun — for a greener Halloween: 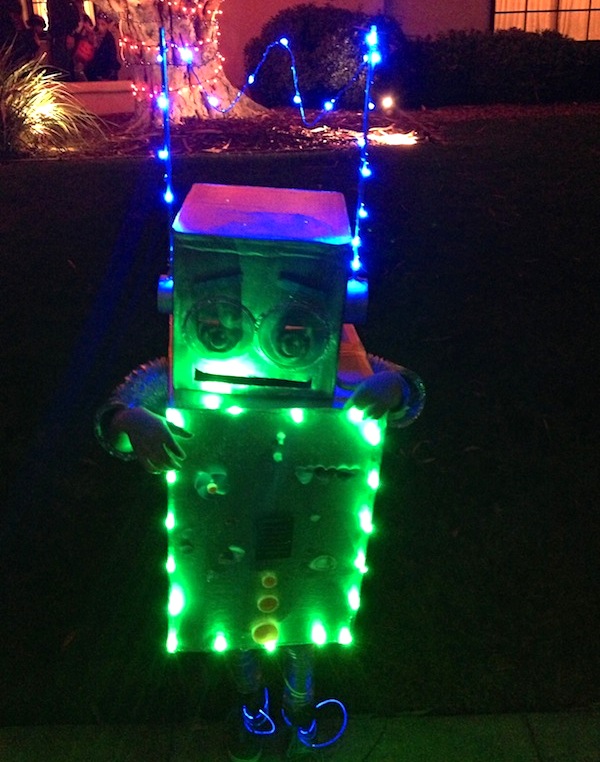 Some of the most fun costume ideas that you can come up with are really just from looking around the house, finding fun things, and making something of what’s already there. There’s a term called upcycling, which is the idea that you can take waste and make it more valuable — not just reuse its component parts. Halloween is a great time to put upcycling into practice. This not only gets parents’ imagination going, but also boosts kids’ creativity. And your children will love that their costumes are completely one-of-a-kind. Tin can lids can become mermaid scales, an old tube sock can make a lemur tail, bubble wrap can be jellyfish tentacles; the possibilities are endless!

Energy geeks always look at Halloween as a great time to raise awareness about electricity vampires. Vampires are technologies that use up electricity even when they are turned off. One of the things I always ask people to do for Halloween is to go around their house hunting for these vampires. Really go look at every single outlet, unplug what’s in it, and think about whether or not you need to plug it back in.

Are there items in your house that don’t need to be plugged in all the time?

Could you use a power-strip that you could easily turn on and off?

Are there items you can even get rid of?

In the United States we expend an incredible amount of electricity — almost 10 percent of total residential electricity use — that’s not even doing anything. Halloween is a great time to round up the kids and go through the house hunting for a different kind of vampire to nip that in the bud.

Knowing When Enough Candy is Enough

Fair trade and local candies are great, but there’s also the simple idea of just stopping the trick-or-treating when you get to a point where the kids have as much candy as they could possibly want. A lot of people don’t realize that in the United States we throw away about half the food we produce! That’s energy and resources wasted to grow it, process it, package it, and transport it — all to be thrown away. That comes largely because we’re just taking more food into our homes than we can possibly consume.

That is a big, big problem considering that the population is already around 7 billion, it’s going to grow to 9 billion, and we have to feed those 9 billion people without major consequences to biodiversity. In order to do that, we have to stop wasting food and Halloween is a great time to reinforce that. There are lots of fun things that kids in a costume can do once they’ve collected a decent amount of candy. Try coming up with post-trick-or-treating fun ideas for them that do not involve food waste!

One thing that’s become a recent Halloween trend is families driving places for trick-or-treating. One of the best things we can do in terms of fighting climate change is to make Halloween local again. It not only saves us from wasting time and gas, but can be hugely beneficial. Halloween is a chance to meet your neighbors. Even if you live in a condo building or a high rise, you can knock on neighbors’ doors in advance to let them know you will be trick-or-treating and see if they will be handing out treats. What other time of year would you feel comfortable knocking on all doors in the neighborhood? In an era when communities are going to have to come together to be more resilient when faced with increased climate change impacts like extreme weather, it’s more important than ever to know your neighbors and have a safety net that’s local. I also find that when people know their neighbors, they are more likely to spend time outside, which means less time in the house in front of the TV.

These are some of my favorite green Halloween ideas. What are yours? What kind of costumes have you made from "junk" around the house?