Get 15% off Honest Mama for Mother's Day w/ code: MAMALOVE Details
FREE GROUND SHIPPING IN THE CONTIGUOUS US* Details
Free Tinted Lip Balm w/ order over $50 | Code: PUCKERUP Details
Get a free gift with your next purchase over $50 | Code: LETSGO Details
Get $20 off your first month's Diapers + Wipes Subscription w/ code: DW20 Details

What is Vitamin D3 (Cholecalciferol)?

This is part of our ongoing series helping consumers better understand chemicals, chemistry, and product formulations. We translate the science, bust the myths, and give you an honest assessment, so you can make informed choices for your family!

What it is: Cholecalciferol is one of the two major forms of vitamin D. It’s what your body naturally synthesizes in your skin during exposure to sunlight and it’s also a commercially prepared supplement made from the lanolin retrieved from washing lambs’ wool. (Note: This form of vitamin D is considered okay for vegetarians because the animals are not killed, but vegans should find alternative sources of vitamin D — more on that below.)

What it does: We call it a vitamin, but vitamin D is actually a hormone that influences more than 3,000 different genes in your body and almost every type of human cell. Research is ongoing to help us better understand this uber-nutrient, but so far studies show the following health benefits:

Vitamin D3 is involved in the regulation of hormones related to stress, and optimal levels have been shown to help reduce conditions like seasonal affective disorder (SAD), depression, and anxiety.

Vitamin D acts as a macrophage in your bloodstream — large, specialized cells that are part of your immune system and attack foreign pathogens. Not only does it help defend against things like the cold and flu, but it’s also been shown to help prevent cancer.

A growing body of research also suggests that vitamin D might play some role in the prevention and treatment of both forms of diabetes, hypertension, glucose intolerance, multiple sclerosis, and other medical conditions.

Why we use it: There are two major forms of supplemental vitamin D:

Vitamin D3 (cholecalciferol) – Which, as mentioned above, is formed naturally in the skin when exposed to sunlight, is present in significant levels in certain fish and eggs, and is also commercially made from lanolin washed from lambs’ wool. (New, vegan alternatives manufactured from lichen have also recently become available and Honest is exploring this as an option for our formulas.)

Vitamin D2 (ergocalciferol) – This form is synthesized by plants (commercially made from irradiated fungus) and is not naturally produced by the human body.

Initial studies conducted several decades ago regarding the efficacy of the two forms showed little difference between the two when addressing the occurrence of rickets in children. But more recent studies reveal compelling evidence of why vitamin D3 is superior for supplementation:

Vitamin D3 is approximately three times more potent than vitamin D2, and it also binds to the protein receptors in your body much more effectively. This helps maintain levels in your circulatory system and more effectively increase blood level concentrations for optimal health.

Vitamin D3 is more bioavailable, meaning it’s more quickly and effectively converted and absorbed by your body. Some sources say it’s up to 500% faster than vitamin D2.

Vitamin D2 also has a shorter shelf life (meaning by the time you get it, it might not be as potent as the day it was bottled) and it has a greater likelihood of impurities.

For these reasons, we chose vitamin D3 for our Health & Wellness products.

Why we’re featuring it today: People have asked us why some of our formulas contain more than 100% of the Daily Value for vitamin D, especially because it’s a fat-soluble vitamin that builds up in your body and can be toxic if you consume too much. It’s a great question and we’re happy to answer it.

To begin with, here are the levels you’ll find in our current products containing vitamin D:

Levels of specific nutrients often exceed 100% because nutrition is a controversial science and there’s no unified consensus on what’s best for public health; recommendations can vary widely between credible institutions and experts. Let’s look at vitamin D:

The U.S. Food and Drug Administration (FDA) recommends 400 IU, so that’s what the Daily Value is set at.

The Institute of Medicine recommends getting between 600 and 800 IU per day (as does Health Canada).

Since the FDA is the regulatory body that oversees Nutrition Fact labels, manufacturers must abide by FDA established Daily Values regardless if they agree with them or not.

It’s interesting to note that many nutritionists argue for higher Recommended Daily Allowances (RDAs) and Daily Values because they were originally established in order to avoid deficiencies, not to promote optimal health. According to Dr. Julian Whitaker, founder and director of the Whitaker Wellness Institute, “RDAs do define the levels of nutrients we need to prevent full-blown deficiency diseases. But they don’t reflect the modern scientific understanding of what nutrient levels promote optimal health, not merely the absence of major disease.” (Read more about what daily values mean.)

On the other end of the nutrition spectrum is the “upper limit” (UL), which is established as a safety threshold. The UL for vitamin D has been set at 4,000 IU daily by the Institute of Medicine. After reviewing the body of research available in 2010, they found adverse effects in people consuming 40,000 IU daily for at least 12 weeks and one case of toxicity at 10,000 IU after more than 7 years of daily consumption. There was no evidence of toxicity between 4,000 IU and 10,000 IU, but they tend to err on the side of caution.

As you can see, while our DVs are sometimes above 100%, they’re still far below what many recommend and well below risk thresholds. We offer health-promoting supplementation, but encourage you and your family to get outside and enjoy the sun to reap the full benefits of vitamin D. And, as always, before beginning a supplement regimen, consult with your healthcare provider to discuss what’s best for your family. 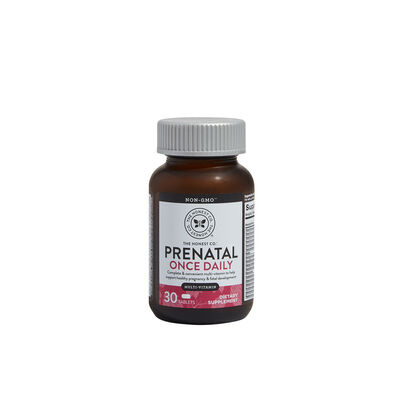 The low down on everyone's brightening fave Vitamin C - courtesy of our Head of Research & Innovation Mallory.

Why we’re all about Hyaluronic Acid

How to Choose the Right Eyeliner for Your Eye Color

While black and brown are great go-to eyeliner colors, there are so many more options. Here’s how to choose the best eyeliner color to complement your eyes!

Whether virtually or in-person, all moms deserve to be celebrated on Mother's Day. Read on to discover our favorite virtual Mother’s Day activities.

The low down on everyone's brightening fave Vitamin C - courtesy of our Head of Research & Innovation Mallory.

Why we’re all about Hyaluronic Acid

How to Choose the Right Eyeliner for Your Eye Color

While black and brown are great go-to eyeliner colors, there are so many more options. Here’s how to choose the best eyeliner color to complement your eyes!

Whether virtually or in-person, all moms deserve to be celebrated on Mother's Day. Read on to discover our favorite virtual Mother’s Day activities.